Taking ten minutes each day to practice deep, cleansing and energising breathing is something that we should all be doing.

Not only does it give incredible health benefits, but it is also free!

Deep Breathing and the Lymphatic System

There are many benefits that arise from making deep breathing a part of your daily routine, most of which are due to the fact that deep, cleansing breaths give your lymph system a helping hand in clearing out the toxins from your body.

What is the Lymphatic System?

The lymph system is commonly referred to as the body’s sewerage system. It works by acting in harmony with the blood, surrounding every cell in the body and protecting each one by removing dead cells, blood proteins and any other toxins and excreting them from the body. The toxins are then removed from the body through our waste products, mucus, or our skin.

The body is hugely dependent upon the lymph system, to the point whereby if the lymph system was shut down for 24hrs you would die as a result of the trapped toxins and proteins surrounding our cells.

In addition to deep breathing, rebounding can be a further way to stimulate your lymphatic system.

The lymph that is collected around the body drains through two ducts into the blood, which are located at the base of the neck (around the thoracic duct). By breathing we stimulate the flow of the lymph, and through deep breath we can encourage the flow to be both cleansing and powerful. Once we breathe, the duct sends the lymph into our blood flow, then onto the liver where it metabolises and then onto the kidneys where the toxins are filtered.

As well as acting as a filter, the lymph system is also able to destroy bacteria, viruses and abnormal cells, such as cancer cells. The lymphatic system also plays a huge role in the effectiveness of our immune system.

If you are able to give yourself five to ten minutes each day to practice deep, cleansing ‘power breathing’ then you will definitely reap the rewards. This is one of the best, most effective exercises you can do for free, every day.

The Tony Robbins breathing exercise is mentioned in the excellent book Unlimited Power and basically consists of breathing in the following ratio:

For example – if you were to breath in for four seconds, then you would hold your breath for sixteen seconds and then breath out for eight.

If you are able to do this ten times, three times a day (morning, evening and before bed) you will notice a huge difference to your energy, your clarity and your ability to ward off illnesses.

OUR GIFT TO YOU.

Get your Ultimate Book of Alkaline & Acid Food for FREE

TRANSFORM YOUR LIFE IN SIMPLE STEPS!

It can be so difficult to make healthy changes to your life AND make them stick.

What if there was a system that could organise everything for you?

Well now there is - The Ninja Path!

The Ninja Path is simple, easy to use, and enjoyable - yet Extremely Effective.

Not some complicated course, nor a book of lectures... This is a Foundation for Life!

It is designed to make a dramatic impact with minimal effort, so no matter how busy life gets, this will work for you. In fact, being on the Ninja Path will literally create more time!

It focuses on building a foundation that, will not only Transform your life, it will set great habits that lasts a lifetime. 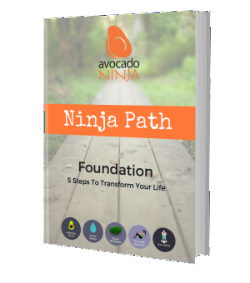